At the Transplantation Research Center (TRC) of Brigham and Women’s Hospital (BWH) and Harvard Medical School (HMS), our primary goal is to build and maintain a world-class facility for the pursuit of innovative, transformative research in the fields of transplantation and immunology. Cross-departmental and interinstitutional collaboration with talented scientists is the key to the generation of research breakthroughs that produce the largest impact on human health. Therefore, at the TRC, we strive to form and nurture productive collaborations with the research community within and outside the Department of Medicine at BWH and HMS. These multidisciplinary investigations are designed to push the boundaries of cutting-edge science forward, as they are also positioned to compete successfully for major grants from governmental, academic, and industry sources.

John P. Merrill is remembered as a leading pioneer in the fields of renal immunology, dialysis, and kidney transplantation, and he is also regarded as a founding father of modern nephrology. He graduated from HMS in 1942, and he spent his entire career on the faculty at HMS and BWH. BWH soon thereafter became the birthplace of dialysis and solid organ transplantation, a process for which Dr. Merrill played a critical role.

Acute and chronic renal failure were invariably associated with death at that time. Dr. Merrill was assigned by Dr. George W. Thorn in the 1940s to oversee a massive, risky project to perfect the operation of a dialysis machine, for which he received one of the earliest Howard Hughes awards. The first successful dialyzer was built by the Dutch physician Willem Kolff, whose research was impacted by the invasion of the Netherlands by Nazi Germany in 1940. Dr. Merrill took over the endeavor to modify Dr. Kolff’s machine, a project that yielded the highly successful Kolff-Brigham Artificial Kidney. The Kolff-Brigham Artificial Kidney was highly sophisticated, and it remains more efficient than current dialyzers, which are simpler to use. Hundreds of thousands of patients are now dialyzed throughout the world, and Dr. Merrill is responsible for establishing the principles of treating dialysis patients that are still followed today.

The June 1950, Brigham Bulletin, the hospital’s newsletter, reported that in two years’ time, the “rotating dialyzer” (reflecting its design) had been used 100 times and “has been the difference between life and death” by allowing nature time to heal the kidneys (1). Dr. Kolff stated that “no man…[has] done more for the propagation of dialysis in the United States than John P. Merrill” (2).

Dr. Merrill was also instrumental in managing one of the most significant medical interventions of the twentieth century–the first successful kidney transplantation in the world. However, several years prior to the first successful kidney transplant, a kidney procured from a deceased patient was implanted antecubitally by David Hume, Charles Anthony Hufnagel, and Ernest Landsteiner. The recipient was a young woman who developed an extraordinary case of acute renal failure following obstetrical complications. Although the kidney transplant was removed a few days thereafter as the patient recovered, the implanted kidney had produced urine immediately. This case stimulated further pursuit by the group of kidney transplantation for the long-term treatment of end-stage kidney disease.

In 1953, Dr. Joseph E. Murray assumed the surgical leadership of transplantation, when Dr. Hume was called to serve in the Korean War.  In 1954, Donald Miller referred a terminally ill uremic patient to Dr. Merrill, bringing to the attention of Dr. Merrill that the patient had an identical twin brother who could act as the donor. The famous patient who underwent this transplantation received a kidney from his twin brother after intensive dialysis prior to the operation, under the supervision of Dr. Merrill. Otherwise, the performance of a major surgery in a terminally ill patient with end-stage kidney disease would not have been possible. Therefore, the first successful kidney transplantation in man was made possible by Dr. Merrill’s construction of a clinically feasible dialysis machine. Over the next three years, Drs. Hume and Merrill oversaw the completion of nine more kidney transplants, after which several recipients surprisingly experienced prolonged graft function (3).

Dr. Merrill is remembered by his mentees as an outstanding human being. He was also an excellent musician and played in a band with his surgical colleagues. He established a culture of scientific innovation at BWH that nurtured the training of many key past and current global leaders in the scientific field of transplantation, including Charles Bernard Carpenter, Terry Strom, Edgar Milford, Jean-Paul Soulillou, Mohamed Sayegh, Laurence Turka, Fadi Lakkis, David Rothstein, Xian Li, Anthony Jevnikar, Barbara Murphy, and many others. These scientists and physicians have also passed on his legacy to their mentees. 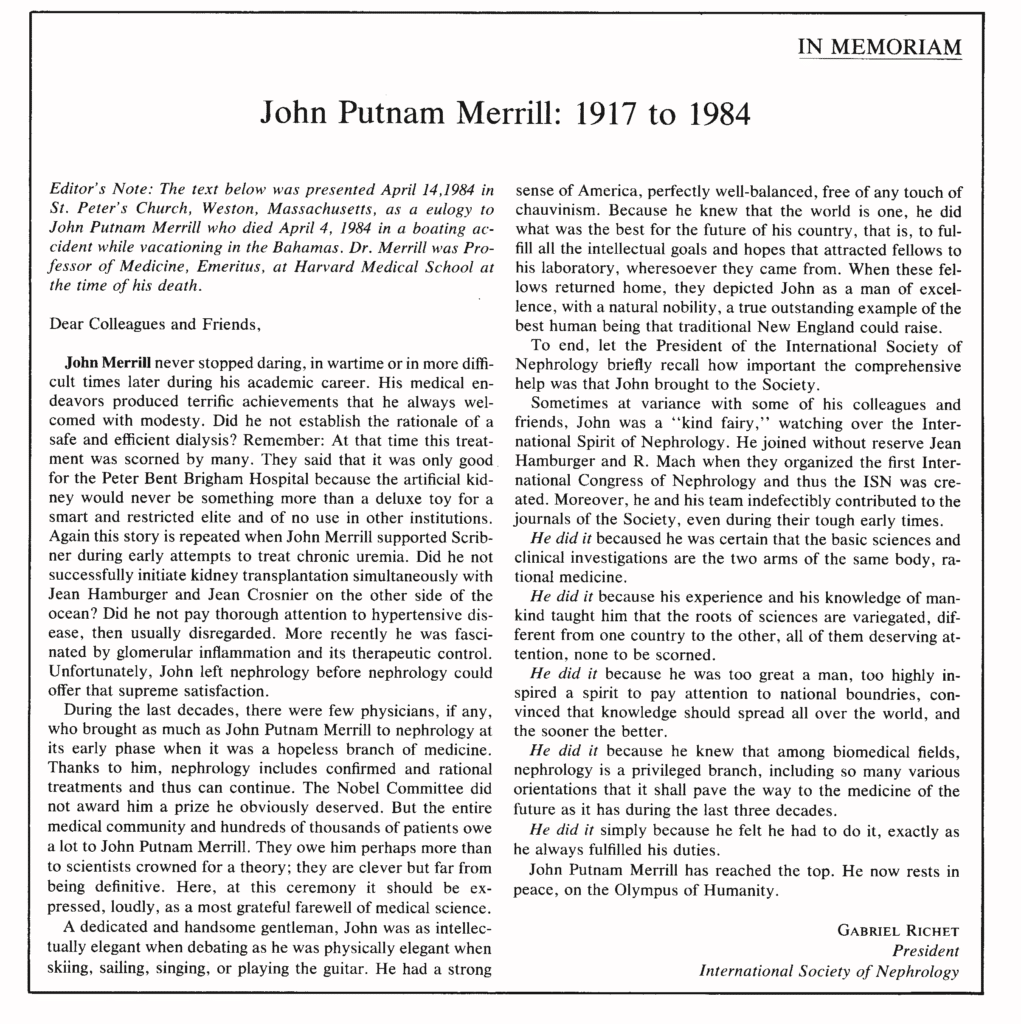 A eulogy delivered by Gabriel Richet, a premier nephrologist and the President of the International Society of Nephrology, described the life of Dr. Merrill as follows:

“During the last decades, there were few physicians, if any, who brought as much as John Putnam Merrill to nephrology at its early phase when it was a hopeless branch of medicine. Thanks to him, nephrology includes confirmed and rational treatments and thus can continue. The Nobel Committee did not award him a prize he obviously deserved, But the entire medical community and hundreds of thousands of patients owe a lot to John Putnam Merrill. They owe him perhaps more than to scientists crowned for a theory; they are clever but far from being definitive. Here, at this ceremony it should be expressed, loudly, as a most grateful farewell of medical science. A dedicated and handsome gentleman, John was as intellectually elegant when debating as he was physically elegant when skiing, sailing, singing, or playing the guitar. He had a strong sense of America, perfectly well-balanced, free of any touch of chauvinism. Because he knew that the world is one, he did what was the best for the future of his country, that is, to fulfill all the intellectual goals and hopes that attracted fellows to his laboratory, wheresoever they came from. When these fellows returned home, they depicted John as a man of excellence, with a natural nobility, a true outstanding example of the best human being that traditional New England could raise” (4).

As the chief inheritor of Dr. Merrill’s legacy, the TRC continues to support the groundbreaking work of talented young investigators, with the dual objectives of creating revolutionary scientific and clinical breakthroughs as well as producing the next generation of global scientific leaders in transplantation, nephrology, and immunology.

However, fulfilling this vision would not be possible without the generosity of donors like you.

If you would like to support our mission to create innovative, transformative research breakthroughs that improve the lives of transplant recipients as well as patients who suffer from devastating immune-mediated diseases, or if you would simply like to learn more about us, please contact us through the following methods: